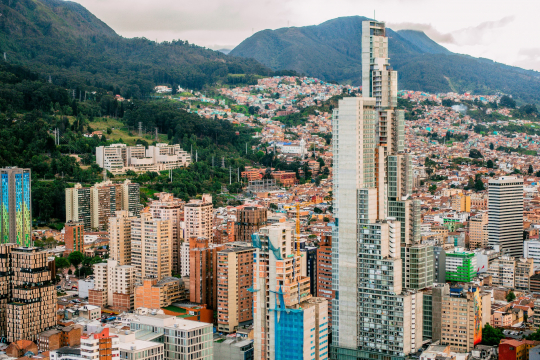 What can the case of Bogotá teach us about solving air pollution problems?

EfD researchers Jorge Bonilla and Claudia Aravena (also WinEED member) recently presented the results of their research on air pollution and inequalities in Bogotá in a workshop, which had the participation of many stakeholders. Among the stakeholders there were representatives from the Secretary of Environment, Secretary of Mobility, Institute of Urban Development of Bogota and the citizenship board for Air quality in Bogota (in Spanish “MECAB” -Mesa de calidad del aire del Bogotá).

Bogotá is a well-known city for its air quality problems, particularly in its southwest zone where air pollution is higher than in the rest of the city. This zone not only has an intense presence of industry and transit, but it also has many not paved streets. Simultaneously, the habitants of this zone deal with higher economic and social inequalities compared to other habitants in the rest of the city. We talked with Jorge and Claudia to know more about this research and their experience with the workshop:

What were the results of your research? What did you learn?

In this research, we compare the impact of three different policies (paving roads, fuel substitution in industry, and renovation of vehicle (diesel) fleet) on air quality in Bogotá. We have found that environmental inequalities are at least as important as social and economic inequalities. Therefore, tackling air pollution (measured in particular matter concentration of PM2.5) must be an important goal in cities such as Bogota, where we find that communities already suffering from the highest levels of social and economic inequalities are those that also bear the consequences of air pollution as they are located in the areas with lower air quality. Therefore, the study of inequalities must be done using a multidimensional approach, which includes other dimensions of inequality.

In particular, we found that paving the streets is the most efficient policy to reduce air pollution in Bogota compared to fuel substitution from carbon to gas in the industry, and renovation of vehicles to EURO VI technology. The problem with streets that are not paved is that airflow and traffic rise dust which carries particular matter, and this creates an air pollution problem. This means that paving the streets in this zone will benefit and increment the wellbeing of people who live in, work, and transit through that zone.

In your opinion, what were the main conclusions from the workshop?

The conclusions of this workshop are mainly two: the first is the importance of the multidisciplinary approach to analyze environmental problems. The second is that policymakers gave great value to the participation of different stakeholders in analyzing the problem of air pollution in Bogotá.

After this workshop, the secretary of the environment of Bogotá invited us to participate in two projects: one aims to identify the air quality problems in the southwest of Bogotá and the other is the design of an index to identify the most important areas of Bogotá to reduce air quality. For this index, policymakers are using the inputs of this research.

Do you have any advice for other researchers who want to do related studies and want to communicate their results in a workshop with stakeholders?

I would give other researchers these tips: a) know the current and future policy needs so you can identify the relevant problems; b) use simple language to communicate your results. There are tools such as policy briefs and infographics that you can use to communicate with a broad audience; c) if you plan to organize a workshop to expose your results, bring together diverse stakeholders. This will enrich the discussion and give you insights for future research.

The title of the workshop was “Design of effective policies for reducing air pollution: integrating atmospheric models into the socio-economic analysis”. In this research also participated Prof. Ricardo Morales affiliated to the Engineering Department at Universidad de los Andes.  Interested readers may see an infographic of the study (in Spanish) here.

There is also a video in which researcher Jorge Bonilla explains the results of the research. You may see it here (in Spanish).