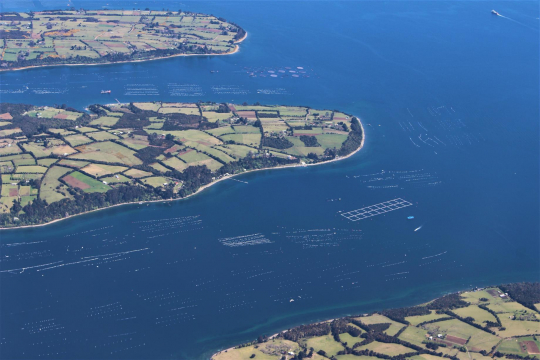 EfD researcher Jorge Dresdner, with co-authors Roberto Cárdenas and Adams Ceballos, have studied the effects of the salmon aquaculture industry on income distribution in coastal communities in Chile. They found interesting results.

The Chilean salmon industry began its commercial development in the mid-1970s, mainly at Los Lagos Region in southern Chile. Since then, and due to the necessity of salty waters and proper temperatures for raising salmon populations, the main locations for farming were mainly selected at the coastal zones of the Los Lagos Region.

Aquaculture in the Chilean context

The installation of this industry generated differential effects in local populations, such as increased employment and education, poverty reduction, and the creation of research and educational facilities.

However, it also brought contentious features, such as low-qualified work at the processing stage, uneven factor income distribution, unequal gender division of labor, poor working conditions, among other negative externalities related to markets, governance, community perceptions, and the environment.

Even though there has been a transition from a labor-intensive to a capital-intensive economy in the aquaculture sector, the impact this industry has on rural income distribution is not much studied, especially in coastal zones such as Los Lagos. Moreover, the effect on income inequality across the different groups is not clear, adding to the debate of population-benefits of aquaculture in Chile. Researchers have until now believed that salmon farms have had a negative effect on income equality.

Aquaculture in Chile reduces income inequalities in the population

To understand this phenomenon in the Chilean context, EfD senior researcher Jorge Dresdner from UdeC and INCAR and his co-authors Roberto Cárdenas from UCSC and Adams Ceballos from UdeC and INCAR, applied an impact evaluation technique to analyze the effects that the advent of the salmon aquaculture industry has had on income distribution in coastal communities in Chile.

The researchers found that the marginal effect of installing salmon farms in remote coastal areas reduced inequality in households’ income distributions, when compared to those located in non-salmon farm areas, with the most important income effects in the middle of the distribution. This contradicts the general assumption of increased income inequality according to other studies in the period 1992 and 2002.

“The results have implications for both public and corporate policies. The general trend of increased income inequality in the region and the country led to the general belief, in the case of the Los Lagos region, that this was a consequence of the installation of the salmon industry,” says Jorge Dresdner.

“This perception in public opinion hinders the acceptance of the new industry and generates impediments for a harmonious development of the industry with the community. The basis for this misperception is the lack of public monitoring and analysis of the socioeconomic consequences of the industry. This is valid, not only in this case but for other industries as well in this and other regions. The misinformation can lead to faulty public decisions about resource allocation.”

According to Jorge Dresdner, a consequence of these results is that “the Chilean government should invest in improving its capacity to monitor and analyze the impact of industries on local communities and territories. Likewise, the results indicate that the industry cannot transmit (or identify) the impacts that its actions have on the local community. In this sense, they should develop much more collaborative and transparent information policies to help the Chilean State to monitor adequately the consequences of their actions on the ecosystem.”

If you want to read the article, please click here.